They were a blast - banging out their tunes with everyone shouting along and dancing wildly. It was also the hottest 'literally' gig I have ever been too! Liam strutted and apart from singing did not say more than two words to the crowd - but that makes him what he is; fantastic arrogance. 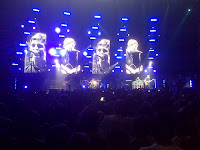 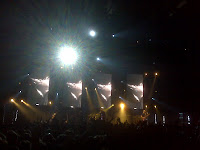 Oasis are an English rock band that formed in Manchester in 1991. Originally known as "The Rain", the group was formed by Liam Gallagher (vocals), Paul Arthurs (guitar), Paul McGuigan (bass) and Tony McCarroll (drums), who were soon joined by Liam's older brother Noel Gallagher (guitar and vocals). Oasis have sold over 60 million records worldwide.

F*ckin’ In The Bushes, Rock ‘N’ Roll Star, Lyla, Shock Of The Lightning, Roll With It, Cigarettes And Alcohol, To Be Where There’s Life, Waiting For The Rapture, The Masterplan, Songbird, Slide Away, Morning Glory, My Big Mouth, The Importance Of Being Idle, Half The World Away, I’m Outta Time, Wonderwall, Live Forever, Supersonic

Oasis Encore:
Don’t Look Back in Anger, Falling Down, Champagne Supernova, I Am The Walrus