Snow Patrol, in my home town and a surprise present from Fiona, and what a fantastic surprise it was, most definitely my favourite concert ever!

This Reworked Tour, where they cleverly reinvented their hits, reinvigorating and in some cases changing out of recognition. This 3 hours concert was just amazing and all credit to Snow Patrol for trying and succeeding to pull it off.

Gary kicked the show off accompanied by a harpist for The Finish Line. Then a throng of additional musicians - a string quartet, brass section, lap steel guitar player and extra percussionist among them - made their way on to the stage,

Gary sported his ear-to-ear grin as he cracked jokes and seemed totally at ease. At one point he even offered one audience member up for a hug to calm his own nerves.

Crack The Shutters was stripped down with only the organist accompanying before the string section kicked in for the trademark chorus. Magical Batten Down The Hatches was followed by a great version of You Can Be Happy, complete with xylophone melody.

Take Back The City boasted a four-guitar acoustic and the band closed the first half of their set with a track I had never heard before; Cartwheels. After the break it was one indie anthem following another and by Spitting Games everyone was on their feet and singing along.

Truly the best concert I have been to – thank you Fiona - thank you Snow Patrol, you’re the best. 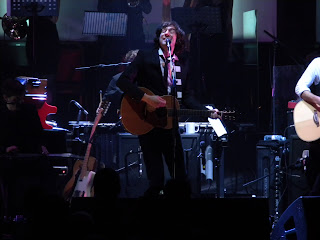 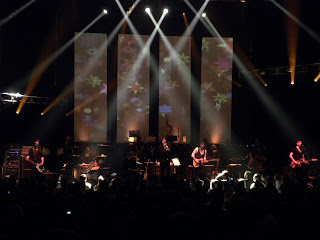 First Half:
The Finish Line, Fifteen Minutes Old, Crack The Shutters , Batten Down The Hatch, You Could Be Happy, Olive Grove, Golden Floor, Grazed Knees, Take Back The City, Cartwheels

Second Half:
Dark Roman Wine, Spitting Games, Making Enemies, Run, Set The Fire, starfighter Pilot, You Are My Joy, How To Be Dead, lifeboats, You're All I Have, Planets, Chasing Cars, Rocket, Chocolate