We were there, U2 360 Tour, one of the best bands in the World, with probably the best live stage ever created - what a truly fantastic evening.

They really know how to please arriving onstage to the tune of Bowie’s Space Oddity the band launch into Breathe. I loved Get On Your Boots bringing more excitement as the two walkway bridges flanking the stage shift to the front allowing Edge and Adam to get really close to the fans and throw some shapes!
Closing section of the show was reserved for the real blockbusters Where the Streets...and With or Without You - magic :-) 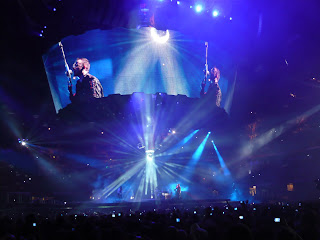 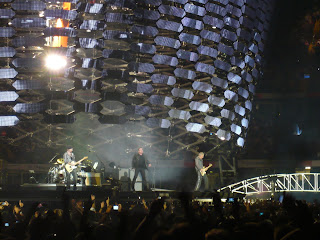 U2 are a rock band formed in Dublin, Ireland. The band consists of Bono (vocals and rhythm guitar), The Edge (guitar, keyboards, and vocals), Adam Clayton (bass guitar), and Larry Mullen, Jr. (drums and percussion).

The band formed at secondary school in 1976 when the members were teenagers with limited musical proficiency. Within four years, they signed to Island Records and released their debut album.

Breathe, No Line On The Horizon, Get On Your Boots, Magnificent, Land Of My Fathers' (the traditional Welsh national anthem) - Beautiful Day - Blackbird, Mysterious Ways, I Still Haven't Found What I'm Looking For - Stand By Me, Stay (Faraway, So Close), Unknown Caller, The Unforgettable Fire, City of Blinding Lights, Vertigo, I'll Go Crazy If I Don't Go Crazy Tonight (remix), Sunday Bloody Sunday, Pride, MLK, Walk On, Where the Streets Have No Name, One, Bad (lyrics)

Encore: Ultraviolet (Light my Way) (lyrics), With or Without You, Moment of Surrender